This is an archive of the original project page, hosted with the permission and gratitude of Fiona van Dahl. Please continue to send fan-edit-related communication to her at fekketc -at- gmail -dot- com. For matters relating to this page, email the host at na -dot- itms76 -at- gmail -dot- com.

Hi! I’m Fiona van Dahl/FekketCantenel. I grew up watching and re-watching The Hobbit, the animated Rankin/Bass movie. It was also one of the first books I ever read. Having recently gone back and re-read the book, I view the animated movie as a near-perfect adaptation, cutting the most superfluous elements while highlighting the most uplifting and entertaining ones.

Like most, I was very excited to hear that Peter Jackson would be taking it on, and the casting and effects looked excellent. However, I was less enthusiastic once it was split into two, and then three, movies. Then they added Legolas, and a love triangle subplot, and Radagast, and layer upon layer of mind-numbing padding… Looking back, I can pinpoint the exact moment my good faith died. (I wrote more on this here.)

I can also pinpoint the exact moment I knew this trilogy was worth rescuing (warning, ending spoiler).

This was my first fan-edit ever, and boy, it was a learning process. I had to learn Adobe Premiere from scratch, and made a few mistakes early on that later needed to be cleaned up.

The whole thing went through several distinct stages. You can see the last half of the process’ updates on Twitter, but here’s the summary:

As I worked on the final version, I occasionally took time out to play with clips and create jokes, YouTube Poop-style.

Hope you brought a snack. (Spoilers ahead.) Revisions from the final (6.0) version are marked with a ★. 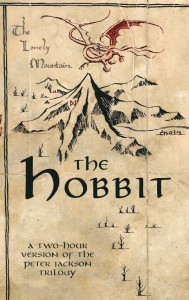 Here’s a video guide to using magnet links. Please seed! I don’t have the best connection in the world, so any help passing this on to others would be greatly appreciated. If there are no seeders, tweet @FekketCantenel and let me know!

This fan-edit is and will always be free. If you find anyone charging for access to it, or for hard copies of it, please let me know!

Many thanks to the following folks who sent me subtitle files! If you would like to create non-English subtitles, please let me know.

I did not create this fan-edit because I hate these movies. I love these movies. It’s just that there’s too much of them. The additions and tonal choices that turn off most people are just background noise to me. Always, but especially through working on this fan-edit, I’ve played a game of peering past the noise, at the awesome ideas that Tolkien created eighty-three years ago.

While I liked reading The Hobbit as a kid, and was always glued to the Rankin/Bass version, and the Lord of the Rings movies were good, it is the Peter Jackson-directed Hobbit movies that truly drew me into that world. They were my obsession for the entirety of 2015. Besides starting and completing the fan-edit (in service of which I taught myself Adobe Premiere), I started an extremely NSFW fanfiction trilogy starring a genderbent Martin Freeman (… Shari Lewis?). I painted runes on my door. My boho wardrobe took on a hairy-footed flair.

The experience was even enlightening. One Japanese word for ‘friend‘ is nakama, which (in troper circles) has come to evoke a group of comrades who ‘know they can depend upon each other in a crisis’. These are companions in a common goal. Through these movies, I finally grasped this concept, and now I know that I want a nakama of my own.

I could go on forever about the nailed-it! casting, the great practical work, the relatively successful CGI, the abundance of humor and drama (which I strived to balance in the fan-edit), the score… I hope I’ve succeeded in highlighting the talent and ingenuity that went into creating these movies, and I hope that somewhere, someone will think of this fan-edit as their favorite version.

I wrote a science fiction/horror novel about people getting infected with immortal alien needle parasites. If that’s something you’re into, check out Eden Green.